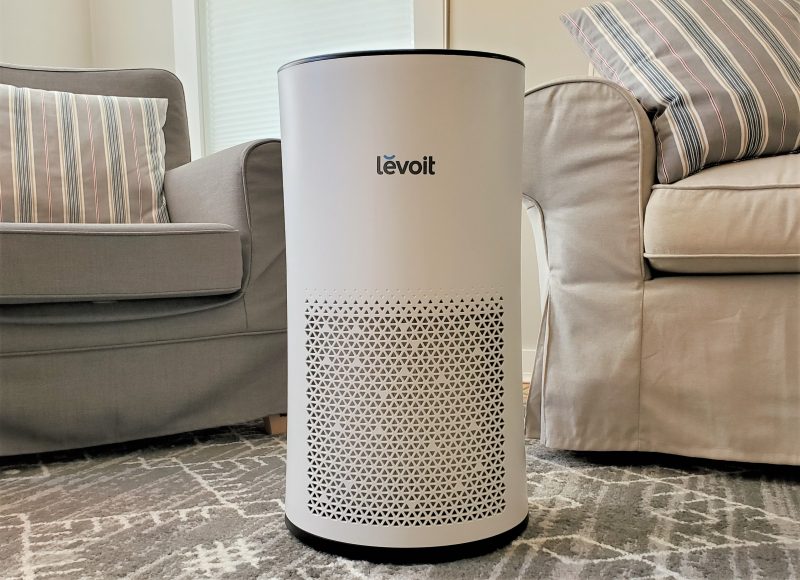 Are you looking for a good quality air purifier that covers a large area and is also moderately priced?

Then you'll want to check out the Levoit LV-H133.

I had the chance to try out this model in my home, and I was impressed!

Keep reading to get all the details about the features and how it works. Then you can decide if this is a good fit for you.

In a hurry? You can click here to do a quick price check at Amazon, if you like.

Quick Navigation
What  are the features of the Levoit LV-H133 Tower HEPA Air Purifier?
3 Layers of Filtration
LED Display and Control Panel
3 Fan Speeds
Sleep Mode
Auto Mode
Air Quality Indicator
Timer
Check Filter Indicator
Display Off
How many square feet will it cover?
Is the LV-H133 quiet?
What is the CADR?
Will it remove mold spores from the air?
Does it produce ozone?
How does the air flow through it?
How often does the filter need to be replaced?
How big is the LV-H133?
How long is the power cord?
Does it have any certifications?
Where is it made?
What's in the box?
Where can I buy it?
What kind of warranty does it have?
What do people like and dislike about it?
Verdict: Recommended

What  are the features of the Levoit LV-H133 Tower HEPA Air Purifier?

The LV-H133 filter element has three separate stages to handle all kinds of impurities in your air.

Here's a breakdown of how it works: 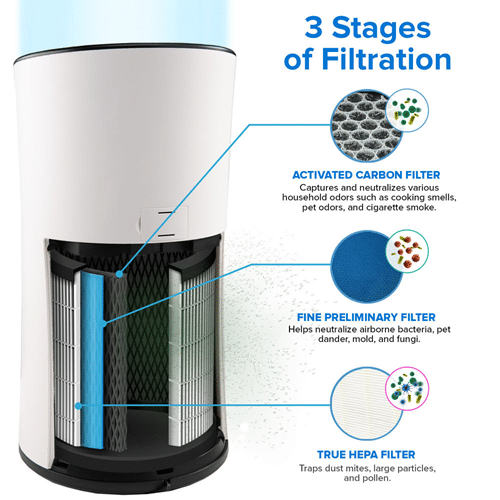 This is a user friendly air purifier. The display panel and controls are simple and responsive. 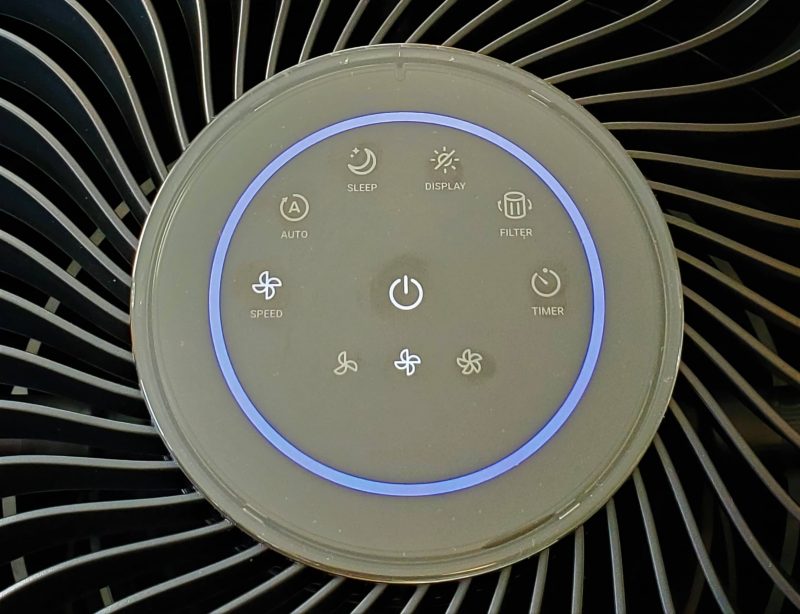 On the display panel, you can select from three speed settings: low, medium or high.

You'll want to adjust the speed according to how bad or good the air quality is in the room.

When you turn the unit on, it automatically resets to the same speed you used last time. This is a useful feature if you use it in the same setting and conditions most of the time. No need to fiddle with the settings every time you turn it on!

When you select sleep mode, the fan runs on the lowest speed it can and still actually be doing some good.

It's lower than the regular low speed, so it's super quiet. You don't even know it's on, but it's still moving air.

This is great if you need silence for sleeping!

If you like the idea of being able to "set it and forget it", you'll love this feature.

A built-in sensor monitors the amount of particles in the air and adjusts the fan speed accordingly.

In my video review, I show how this works in real life. You can find that video a little further down the page.

There's a circle of light on the display that changes color to show the quality of the air in the room. The color also matches the fan speed.

The goal is to be in the blue zone, so the fan will keep running at higher speeds until the air is clear. Once the light is blue, you know you're breathing clean air again.

This is a great feature for people who forget to turn things off.

You can set the timer for anywhere from 1 to 12 hours, and it will shut off automatically.

So, say you want it running only at night while you're sleeping. You can turn it on and set the timer for 9 hours before you go to bed. Then it'll turn itself off while you're busy getting ready to head out to work in the morning.

One less thing to have to try to remember!

After several months of use, this indicator on the display panel will light up to remind you to check your filter.

It doesn't necessarily mean that the filter has to be replaced. It might just need to be vacuumed off. But you won't know unless you take the filter out and look at it.

Another helpful feature for those of us who tend to forget things!

Some people are bothered by lights from electronics at night.

I know I am. I don't want any light in the room when I'm trying to sleep.

So you can just press the display off button, and the lights will turn off. The purifier keeps running, though.

To turn the lights back on, just press any button except for the power button.

How many square feet will it cover?

So that's perfect for a kitchen, living area, large master bedroom, or an office

Yes, it's quiet - especially on the lowest setting.

If the room is perfectly quiet, you can just barely hear the fan when it's on low. In sleep mode, you can't hear it at all.

The highest setting is loud, but it's not annoying. It just sounds like a fan to me. You wouldn't want it right next to you when you're trying to watch tv, but it doesn't interfere with normal conversation.

The technical specifications say the noise level is 26 to 52 decibels, if that means anything to you.

What is the CADR?

This isn't really a true CADR*, but it gives you a general idea of how much air it can move. And that's a good high number.

By way of comparison, the Levoit Vista 200, which is designed for a small area, only moves air at a rate of 40 CFM.

Suggested Reading: My review of the Levoit Vista 200

*CADR rating is three numbers, indicating the ability to remove smoke, dust and pollen. It's a voluntary rating, and Levoit does not participate.

Will it remove mold spores from the air?

Mold spores range in size from 3 to 100 microns. The True HEPA filter traps particles as small as 0.3 microns. So, it's able to trap those spores.

Does it produce ozone?

This is important for those with respiratory conditions like asthma or COPD.

Air purifiers that do produce ozone use UV-C lights or ionic air purification. The Levoit uses neither.

How does the air flow through it?

There are two large air intake areas in the bottom of half of the unit.

The air passes through the filter and then is sent out the 360° vent at the top.

Because of the circular design, you need to keep it at least 15 inches away from the walls or furniture. Otherwise, you'll block the flow of air, and it won't work as efficiently.

How often does the filter need to be replaced? 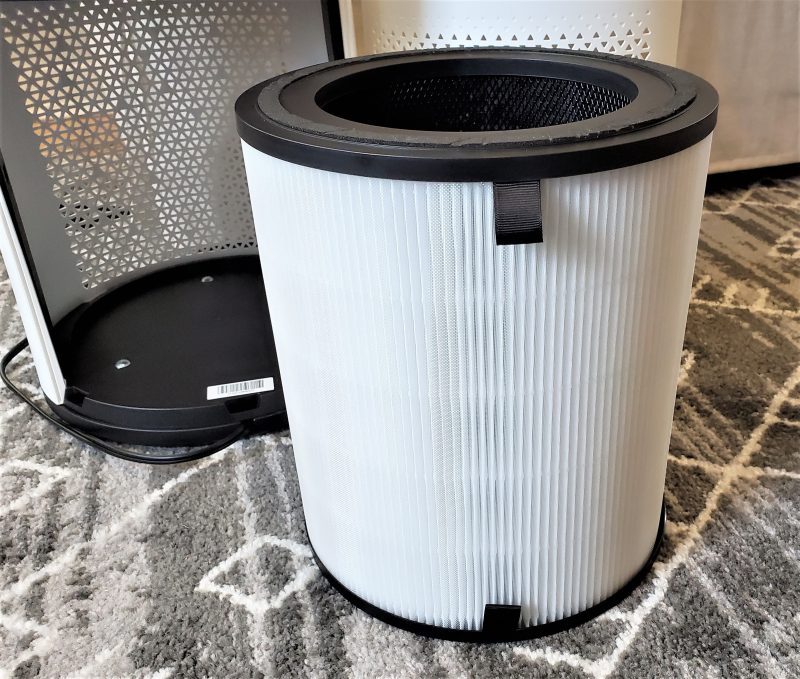 There are few indicators that it's time to replace the filter:

How long it lasts depends on several factors: the quality of your air, the level and type of activity in the room, and how many hours per day you use it.

Vacuuming air and dust off the outside of the filter element will make the HEPA filter last longer. And keeping it in the "Auto" mode can also keep it from wearing out as quickly.

When you do need to replace it, look for the Levoit LV-H133-RF ​replacement filter.​​

Click here to check the price and availability of the replacement filter at Amazon.

It's about two feet high, and has a diameter of about 12 inches.

This is a big air purifier that takes up a good bit of space. So don't think you can just tuck it into a corner and no one will notice it.

Fortunately, it's not very heavy - about 18 pounds - so it's easy to move to wherever you need it.

How long is the power cord?

It's about 6 and a half feet long.

So, unless you live in an old house that doesn't have many outlets, you shouldn't have any trouble finding a place to plug it in.

Does it have any certifications?

This model isn't Energy Star certified, but it does have some safety certifications. Those include:

FCC? What does the FCC have to do with air purifiers?

Well, that means it gives off an acceptable level of electromagnetic radiation.

Where is it made?

The box says "Made in China".

What's in the box?

Where can I buy it?

One option is to buy directly from Levoit.com.

You can also try eBay or Amazon.

Check the price and availability at Amazon by clicking here.

What kind of warranty does it have?

It comes with a one year warranty and lifetime support.

If you register your purchase at Levoit, they'll extend your warranty to two years.

The pros definitely outnumber the cons. Here's the general consensus, based on online customer reviews and my own experience with it:

To be honest, after my experience with the Levoit Vista 200, I wasn't expecting much. But I was pleasantly surprised by the LV-H133's performance.

It's large, and it's powerful, so it can move and clean the air in large spaces.

The control panel makes it easy to customize the settings to suit your lifestyle, and replacing the filter couldn't be easier.

Its efficiency and affordability make the LV-H133 an excellent choice for anyone needing a large room air purifier.

​Click here to check the current price at Amazon.

If you'd like to check out some other brands of air purifiers, please see my review: Best HEPA Air Purifiers for Home and Office.

Disclaimer: I was provided with a free Levoit LV-H133 air purifier in return for my honest review. I have not - nor will I - receive monetary compensation from Levoit for this review. All opinions expressed herein are my own and not influenced by the manufacturer and/or its affiliates, in any way.​