Chlorine vs Chloramine in Drinking Water: What’s the Difference and Why Does It Matter? 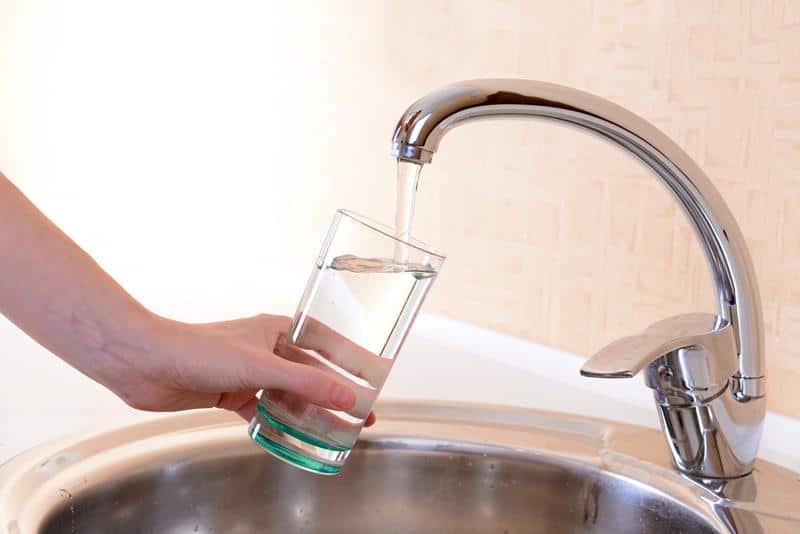 Most municipal water suppliers in the U.S. add chlorine and/or chloramine to the water. If you're on city water, do you know which is in the water you drink?

Why does it matter, anyway?

Well, if you're concerned about toxins in your water, you need to know exactly what's in it so you can correct the problem.

Although chlorine and chloramine sound similar, they're not the same. They have different properties, and they can affect your health in different ways.

And, they don't respond to filtration in the same way. What works for chlorine doesn't always work for chloramine.

So, keep reading to learn more about these two common toxins, how to know which is in your water, and how to eliminate it.

Why are chlorine and chloramine added to water?

The quick answer: to kill germs.

Chlorine and chloramine are the two most common disinfectants municipal water suppliers use to make drinking water safe.

They both kill microorganisms that cause disease and make people sick - like bacteria and viruses . 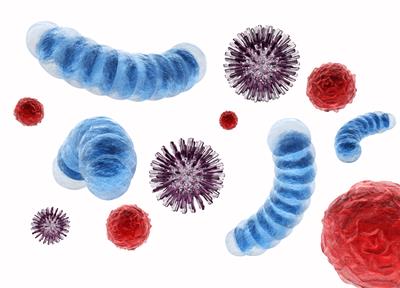 Suppliers might use only one or the other, but many use chloramine in addition to chlorine.

Both also help to control biofilm in the water system.

Biofilm is a collection of living and dead material on a surface. It can be in the form of a film or a small patch. Either way, left alone, it collects nasty stuff like parasites and viruses, and it's a great place for bacteria to grow.

You don't want your water passing through that kind of environment on its way to your faucet. So the addition of these chemicals prevents that from happening.

Is it safe to consume chlorine and chloramine?

According to the Centers for Disease Control (CDC), it's safe for most people to consume chlorine and chloramine in small amounts - up to 4 parts per million (ppm).

But, not everyone agrees, and you'll find plenty of opposition to the CDC's stance. There is agreement, though, that chloramine is harmful to kidney dialysis patients.

Chloramines can also generate nitrosamines, which are thought to be human carcinogens and can cross the placenta.

Although chlorine and chloramine are considered safe at 4 ppm, they can make water smell and taste like bleach, which nobody likes. And that's why many people turn to water filters to fix the problem.

Also, if you have an aquarium, you should know that chloramines are harmful to fish.

What is chloramine and how is it different from chlorine?

Chloramines are compounds made up of chlorine and ammonia.

There are different types of chloramines, but the one used for disinfecting drinking water is monochloramine. This is different from the chloramines used for indoor swimming pools.

Chlorine works better than chloramine as a disinfectant, but chloramine lasts longer in the water.

So, municipal water suppliers will often disinfect the water first with chlorine to kill all the germs. Then they'll add chloramine to keep microorganisms from regrowing in the pipes on the way to the consumer.

Chloramine doesn't affect the smell and taste of water as much as chlorine does. But, it doesn't dissipate from the water the way chlorine does.

If chloramine isn't as effective as chlorine, why is it used?

First, the added chlorine gets used up quickly and sometimes doesn't last until the water reaches the end of the line.

This is especially a problem for large water distribution systems. It's important for the disinfectant to be present in the water at all times to prevent the growth of harmful microorganisms.

Because it lasts longer, chloramine adds another layer of protection to the water. If the chlorine gives out, the chloramine will get the job done.

DBPs are chemical substances that form when disinfectants react with organic matter in the water.

These DBPs are bad news. They're known to increase the risk of bladder cancer and can cause reproductive problems like miscarriage and low birth weight.

So, although both chlorine and chloramine form DPBs, chloramine might be less harmful. But, they form different DBPs, and there hasn't been a definitive study proving that one is safer than the other.

What are the negative effects of using chloramine in water?

Besides the health problems associated with the formation of DBPs, chloramine can cause problems in water systems and plumbing. And some of these can have negative consequences for your health, too.

Chloramine can cause corrosion of pipes and solder, which in turn can leach copper and lead into the water.

In fact, this caused a major health crisis in Washington D.C. in the early 2000's. The city water supplier switched from chlorine to chloramine, inadvertently causing a huge increase in lead levels.

It's also harder on rubber than chlorine is. So, for instance, the rubber flapper in your toilet will break down faster if your water has chloramine.

Another problem caused by the chloramine is nitrification.

According to an EPA publication, Nitrification can have the adverse impacts of increasing nitrite and nitrate levels, reducing alkalinity, pH, dissolved oxygen, and chloramine residuals, and promoting bacterial regrowth.

Reducing alkalinity means the water becomes more acidic and, therefore, corrosive. Again, this will cause problems for metal pipes and pipe liners.

How can I know which one I have in my water?

The easiest way to find out whether there is chlorine or chloramine (or both) in your water is by contacting your water utility and ask for their Consumer Confidence Report (CCR).

All water suppliers are required by law to publish a CCR and make it available to their customers.

(For more information, go to the EPA CCR page.)

By the way, if you're on a well, there is no CCR because wells aren't regulated. If you're not sure if your water has disinfectants in it, you can have it tested.

How can I get rid of chlorine in my water?

Three things you can do:

How can I remove chloramine from my water?

Unlike chlorine, chloramine molecules are stable and hard to remove from water.

You'll need to use a filter, and not just any old filter.

Many of the big name brands don't remove chloramine. That's why you need to pay special attention to the specific contaminants that a brand claims to remove or reduce.

Activated carbon can remove chloramine, but the water needs to be in contact with the carbon for at least 10 minutes. So the larger and slower the carbon filter, the better.

The most effective type of carbon is called catalytic carbon. Generally, if a brand uses catalytic carbon filtration, you'll find that it removes chloramine along with a wide range of other contaminants.

So, if a filter removes chloramine, you can know that it will also remove chlorine.

It's not always easy to find this type of filter, though. Manufacturers sometimes are reluctant to reveal the specifics of their filtration media because it's considered proprietary information.

Which water filters remove both chlorine and chloramine?

Fortunately, you can find a variety of water filters that will take out chloramine along with chlorine.

Below is a list a specific brands that claim to remove or significantly reduce chloramine. The list is sorted by type of water filter.

Clicking on the name will take you to a review on this website where you can get the details about that particular brand. 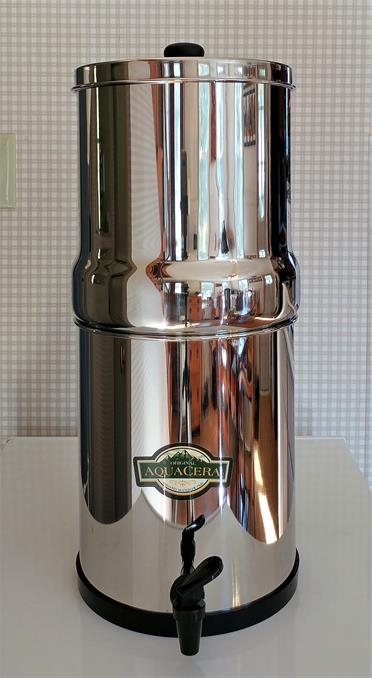 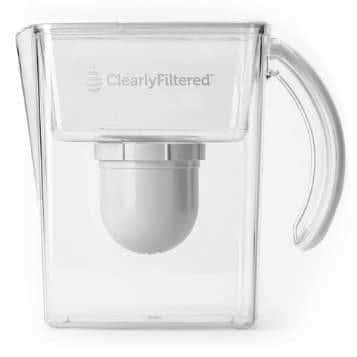 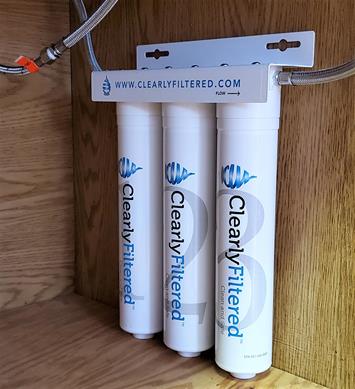 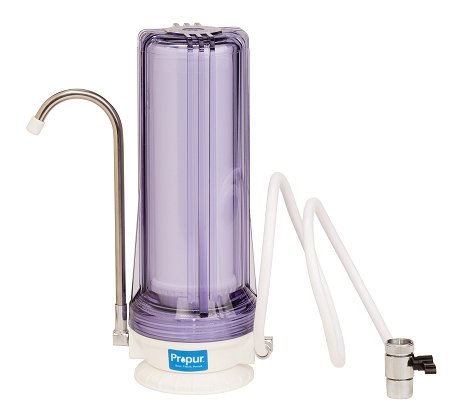 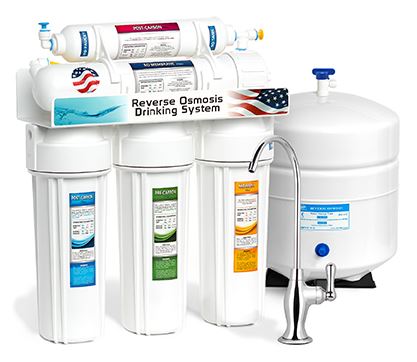 Now that you know more about chlorine and chloramine, what actions will you take?

Find out what's in your water, if you don't already know.

Then - especially if there's chloramine in it - make sure your water filter can handle it. If it doesn't, it's time to find a new one. You can start by checking out the filters in the list above.

Here's a list of the sources I used to write this article along with links, in case you'd like to read more.

Effect of Chlorine vs. Chloramine Treatment Techniques on Materials Degradation in Reclamation Infrastructure (U.S. Dept. of the Interior)

Not sure what kind of water filter you need?
Start here:

How to Choose the Best Water Filter for Your Home